Wedding bands are meaningful, symbolic gestures that speak volumes and display the unity of marriage and togetherness for the entire world to see. It shows the two parties that decided to become one are committed to the vows of a lasting partnership. Some couples decide on identically styled bands to tell the world they represent half of the whole.

Matching bands are fabulous jewelry pieces that do not need to be expensive. Even though dual wedding bands are new in today’s world, puzzle rings were quite popular during the Renaissance. These band types are called Gimmel rings. Although they were joined together during the ceremony, only the woman wore the ring.

The tradition of men wearing wedding rings dates far back in this part of the world, with the double-ring ceremony gaining traction during the mid-20th century, around the Second World War. The wedding rings were a comforting visual for soldiers in the harsh realities of the war and served as a visual promise for the brides left behind.

As traditions evolved, matching wedding bands became a trend. Today, many couples typically exchange dual rings. The ring designs can be identical matches or different rings with matching designs. The amount that the rings match each other as a set depends entirely on the couple.

While matching 'his and her' wedding rings is a traditional choice, they are not the only option for couples to make their vows. It is not necessary to have two-tone wedding bands his and hers. The choice to have matching rings depends entirely on the partners in question and their tastes. While some couples would love to get identical bands, others are satisfied with similar designs on theirs.

To Match or Not to Match 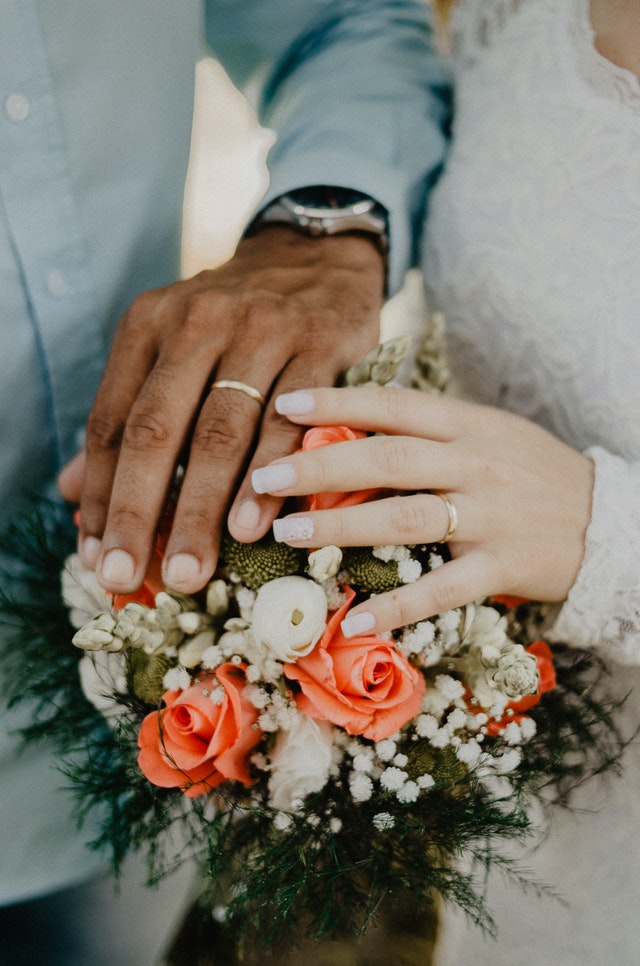 Many factors surround the couple's decision to go for matching rings or not. One of the most crucial factors is the preference of each couple. Many couples decide on matching bands for the sentimental and symbolic meaning of the match. By choosing matching rings, the duo proclaims their unity and how they are both becoming one.

Another reason to consider before choosing is that matching bands simplify the shopping decision. When the couple decides on a single design, it makes things easier. Specifically, this saves them from agonizing over rings, and their energy is better focused on several other factors instead. While some couples lean towards simplicity by choosing a plain band, others prefer the elegance of diamond wedding bands.

Another significant factor to consider when assessing whether to go for matching wedding bands is the budget. Simple wedding bands are often the most inexpensive option. If you purchase an expensive engagement ring, the funds left over may not be enough for another costly wedding band. The amount set aside for the wedding band may also be smaller if the couple saves for a glitzy wedding ceremony later.

How to Style Matching Bands

'His and her' wedding bands can use contemporary designs to create a matching set. You can style his ring in yellow gold, and her ring may feature blushing rose gold. The styles and details do not have to be precise, but can be similar. If her ring contains a row of pavé set diamonds, his ring can include the exact details in larger prints.

You can also use birthstones to design the ring in complementary styles. Her ring can feature his birthstone, and his can feature her birthstone. That makes each similar in many patterns, but they are not identical. The similarities and contrast will also become more pronounced when placed side by side.

Some couples could also integrate matching patterns to create a ring that becomes part of a puzzle. The ring design can be half of a heart or half of an infinity symbol, with the puzzle complete when you pair the jewelry items together, thus creating an image.

Some couples subscribe to the belief that opposites attract. They could decide to incorporate that belief into designing their wedding ring. The wedding bands created will contrast each other in style, shape, or color. The result is beautiful, breathtaking, and complementary by infusing the opposing metals like white gold and yellow gold or black ceramic and white platinum.